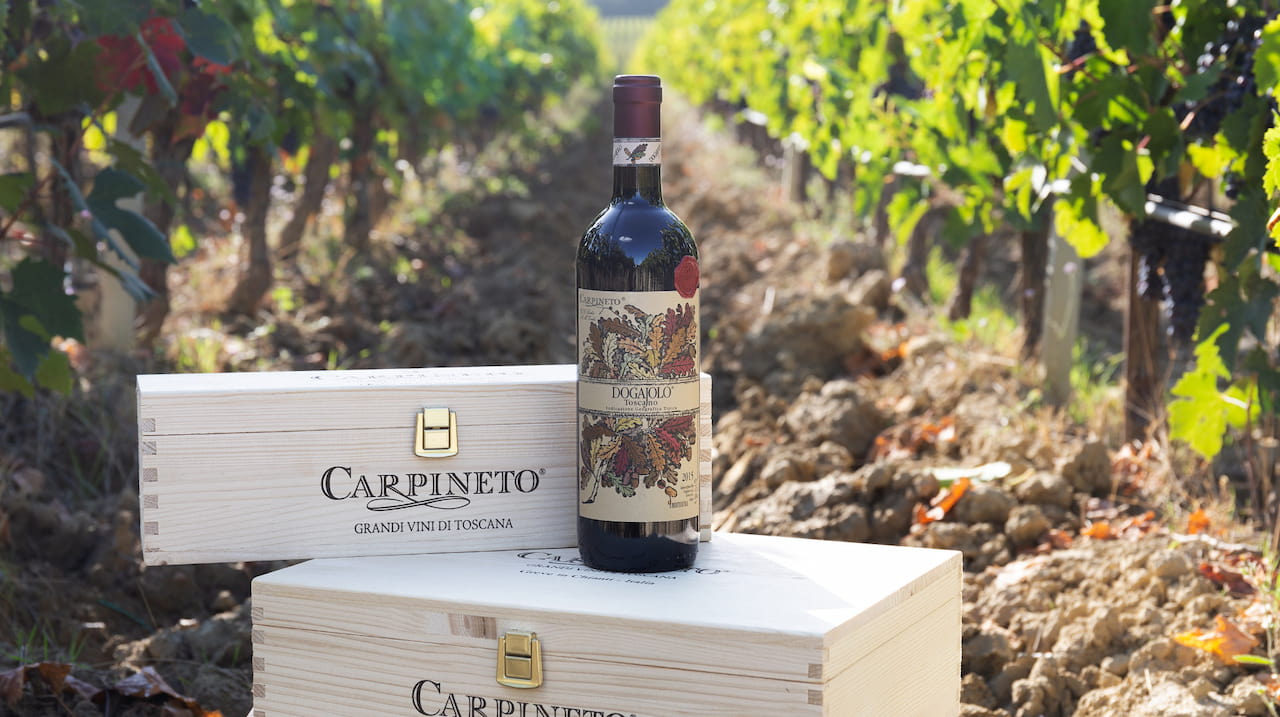 This is a unique product, a youthful “Super-Tuscan” with qualities that are rarely found in the same wine. Dogajolo is a rich and fragrant wine that blends the intensity and deep hues of a young wine with the refinement and balance provided by wood aging.

Because the grape types ripen at different times, they are vinified individually. They are mixed at the end of fermentation and placed in small hardwood casks to finish the alcoholic and malolactic fermentations gently.

When fresh, it’s fantastic, but like with any good red wine, it improves with age.

With flavors of cherry, coffee, vanilla, and spice, this wine is very fruity and powerful.

Full-bodied, gentle on the palate, complex, and well-developed flavor.

Violet reflections in a deep garnet.

Dogajolo pairs well with first courses and white meats because to its fruitiness, but it shines with full-flavored dishes like roasts, grilled meats, cold cuts, and Tuscan regional specialties.

Sangiovese is divided into different varieties based on the size of the bunch and the berries, with the two most important being Sangiovese Grosso and Sangiovese Piccolo, with the former being used in almost all major productions and the latter being more vigorous, productive, and qualitatively superior.

Sangiovese is a strong but difficult to cultivate grape because, while it adapts well to a variety of climates, it suffers from cold and humid conditions.

It has no special requirements in terms of soil, but it appears to favor the less fertile and calcareous ones, where it produces the best results, in warm temperatures and dry settings. Germination takes a fair amount of time, and the fruit ripens late. It is susceptible to chlorosis and, if let to mature too long, becomes excessively acidic.

Apart from France, Tuscany is Cabernet’s other elective homeland, where the Super Tuscan phenomenon began in the 1970s, driven by Sassicaia. The primary area remains the strip of land between the sea and the hills around Castagneto Carducci, in northern Maremma, with its DOC Bolgheri, despite its presence in Chianti and a vast section of the region.

Also in Italy, the Euganean Hills, where the Cabernet manages to find excellent conditions and good temperature variations to be velvety, the Collio and Alto Adige, especially in the Bolzano basin, are other regions of proven deliciousness.

The birth of Supertuscan wines can be traced back to some producers’ desire to adopt an enological renaissance in response to the decrease in the reputation of Tuscan wines in the 1970s, when growers were still focusing on vast quantities over quality.

Tignanello, the most famous of the Supertuscans, was created by Piero Antinori and oenologist Giacomo Tachis. The premise behind it, namely making maturing wines as noble as French Bordeaux, but using Sangiovese as the main grape, was revolutionary.

Consumers praised and trusted these new wines, and this trust is based on a specific producer rather than a designation or a stereotyped region.

Contrary to popular belief, Supertuscans are not exclusively produced from foreign vineyards or grapes, even if the most notable innovations in production were the predominant use of these grapes, possibly combined with Sangiovese, and the nearly universal acceptance of the use of barrique passage.

Many Supertuscans have received international recognition, but these wines must be credited with discovering and enhancing new regions particularly suited to Tuscan viticulture all along the Tyrrhenian coast, which had been virtually disregarded until a few years ago.

is the first and biggest giftcard network in Hong Kong. Choose among our restaurants: Spasso | DiVino | DiVino Patio - Buy a gift!